If a little content is good, a lot of content is better … right? Not necessarily. Fact is, the people who are reading that content have a limited attention span and you want to hit their sweet spot, not saturate them and run the risk of pushing them away.

But how to do that? Buffer offers a few suggestions on the matter, touching on social-media outlets from Twitter to Google and additionally providing specific content lengths for everything from a headline to a blog post and more.

Twitter:  As reported by BufferSocial, Buddy Media finds that 100 characters is the perfect length for a single tweet on Twitter. Moreover, Buddy Media found that tweets that were less than 100 characters enjoyed a 17 percent higher engagement rate. This echoes previous research by Track Social, which also pinpoints 100 characters as a perfect tweet length and notes a jump in retweets among tweets ranging from 71 to 100 characters. 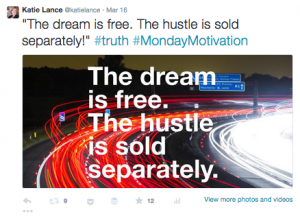 Short, sweet and to the point.

Facebook: According to researcher Jeff Bullas and as reported by BufferSocial, 40 is the target number of characters for a perfect Facebook post. Studying like and comment rates as well as post engagement, Bullas determined that shorter posts got 86 percent higher engagement than their wordier counterparts. Taking it one step further, Bullas also found that posts with 80 characters or fewer got 66 percent higher engagement. Additionally, a study by BlitzLocal took into account nearly 120 billion Facebook impressions, finding that longer posts tended to garner less interest. 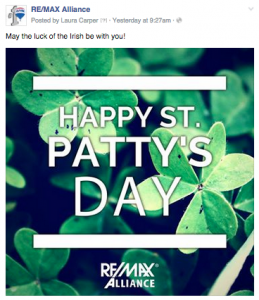 Google+: BufferSocial reports that Demian Farnworth of Copyblogger found that headlines should not exceed 60 characters so as to keep the text on one line. That said, if you simply can’t keep it to one line, make sure your first sentence rocks the house. If we’re talking about overall post length, Qunitly Research saw spikes at polar-opposite points in posts: at 5 characters and length and then again at 442 characters in length. Here you can write more and run less risk of losing your audience. 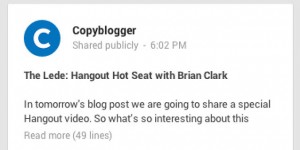 When Google+-ing it, keep your headlines to a single deck.

Headlines: What would you say if I said six words, max? BufferSocial tells us that headline expert Bnonn claims we scan rather than read headlines. Writing for KISSmetrics, Bnonn acknowledges that a six-word limit is hard to attain, but encourages headline writers to make every word count – especially the first and last three. That’s something to remember. 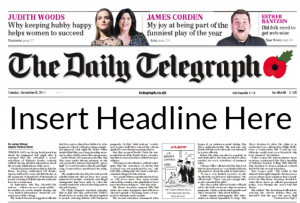 Fill in the blank with as few words as possible.

Blog: How much is too much? Medium tells us that readers are generally willing to remain with an article for 1,600 words. That’s approximately a seven-minute read, and that’s actually longer than many articles. In fact, Medium found that 74 percent of posts are less than three minutes long, with 94 percent less than six minutes long. 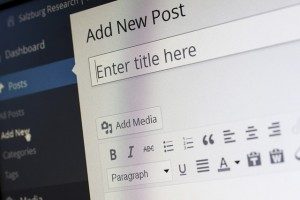 A seven-minute read is about as much as the average blog visitor will tolerate.

Email Subject Lines: Finally, what about the length of an email subject line? Surprisingly, there isn’t much variety in how a reader will receive a subject line whether concise or wordy. That’s according to MailChimp, which found in September 2012 that, as they put it on their blog, “Subject Line Length Means Absolutely Nothing.” Other research tells us that we might want to ballpark these subject lines anywhere between 28 and 39 characters long. Mailer Mailer found that opens and clicks improved around this range and then dropped on either end. 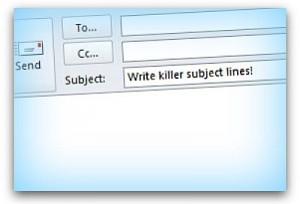 For more resources, check out 5 Steps to Crushing Your Content Strategy in 2015 and How Often Should I Post on Social Media? Also, if you haven’t already signed up to receive my Content Strategy Grid, get on it!